This article is also published in the February issue of Automated Buildings.

Photo-realistic Graphics are the Future for BAS

It’s a visual age; where even when watching TV we want to be immersed in our movies or feel like we’re sitting in the front row at the football game. As graphics capabilities evolve, we expect the same in the building automation world. As a control system graphic designer at QA Graphics, I’ve personally seen this trend take shape.

Symbol libraries and stock images used within the industry have significantly advanced. QA Graphics has led many of these trends, driving the industry to higher graphics standards. They created custom symbol libraries for six of the largest control manufacturers, most recently having provided 3D image creation and super templates for Johnson Controls Inc.’s Metasys® Graphics+ graphics package and the 3D graphic library for Tridium’s Niagara AX Framework® 3.7.

I do see a large interest in the industry for system graphic development using existing stock graphics, but I have also increasingly seen the interest of clients wanting more realistic features. There have been limitations as to what custom can mean, but as control systems evolve, it’s allowing more capabilities than ever. Building operators want the equipment they are looking at on-screen to look just like what they are actually seeing in the mechanical rooms. Years from now, we’ll probably be able to check system controls by viewing a fly-through of a fully custom-designed, photo-realistic mechanical room.

The main difference between stock images and custom photo-realistic graphics is that custom graphics are tailored to a specific piece of equipment. It is an exact duplication of the one that is sitting in the mechanical room. No matter how detailed stock images get, they will never accurately depict a full mechanical system in the same manner that a custom design can offer. Designers can take an image of a piece of equipment and use 3D software to recreate a visual solution that mirrors the original photograph. The software can duplicate compositional and lighting components to maintain an exceptional degree of realism to accurately feature the equipment.

There was a time when computer-generated image designers wanted the finished product to be more like the original photograph. Today’s thought process goes beyond the idea of just duplicating a photo, but to improving the imperfections and lack of capabilities. They can fix things like bad lighting and add stronger composition to create a sharper image than a photo can offer. More than improving them, today’s custom HVAC designs allow options that are not even possible to capture in a photograph. With custom graphic designs, it is possible to show the interior of equipment and how it functions. For instance, you could demonstrate how a water pump moves the water from one set of piping to another. It is also possible to show a part of the exterior of say for example, a chiller and simultaneously sees a cutaway displaying the internal functionality of the chiller converting hot supply water to cool return water in the same image. 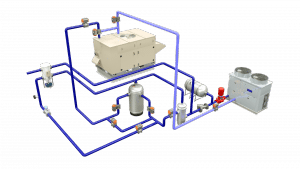 Combining these capabilities of present-day graphics with the ability to incorporate building control system data seems to be the way of the future. 3D graphics are not limited to any specific building automation system and are becoming more popular industry-wide. As these types of graphics become more common, the demand for a higher quality standard of graphics will increase. Then it only becomes a matter of if you want to stay ahead of the curve or behind it.